The objective of this independent study was to scientifically analyze the effectiveness of Deter Insect Repellent™ and to compare the product’s efficacy against a DEET-based insect repellent (Cutter® 7% DEET) along with an untreated control. The study was conducted using the Cage Test Method and analyzed the landing/biting activity of 100 female tree hole mosquitoes (Aedes sierrensis). The arms of human test subjects were exposed every 10 minutes during the 4 hour test period.  The entire study was replicated twice.

The test results issued in July 2012 demonstrated the average mosquito landing rates during the 4 hour test period were as follows: untreated control 9.2; Cutter 7% DEET 1.84 and Deter Insect Repellent 0.56.    Results also showed that Deter Insect Repellent™ remained effective for 4 hours without any reduction in repellency, compared to the DEET-based product that showed a significant reduction in repellency after 3 hours.

“It is difficult to find a natural mosquito repellent that works”, explains Brad Zaro, President & CEO at Mariner Biomedical, the company that developed Deter Insect Repellent. “It required extensive scientific research to develop a natural, DEET-free product that is truly effective against mosquitoes and other biting insects. We are proud that our dedication to product quality was validated by the results of this independent study”.

Deter Insect Repellent™ is one of the only natural insect repellents which has scientifically demonstrated its safety and efficacy. Consumers have a large number of repellent products on the market from which they can choose. DEET-based products remain the most commonly used repellents. However, with growing concerns about the safety and environmental impact of DEET, as well as other chemical based repellents, consumers are increasingly seeking safe natural alternatives.  Deter Insect Repellent™ is proven safe, effective and environmentally friendly, providing consumers with a product that really works and that they can feel good about using.

Details about the Independent Laboratory Testing 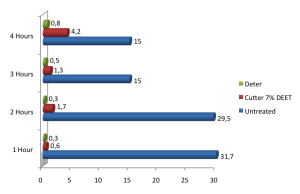 METHOD: Screen Cage Test was employed using the tree hole mosquito Aedes sierrensis. 100 hungry female mosquitoes were present in a screened cage. The arm of a human volunteer was inserted into the cage for 2 minutes and the landing and feeding rates were recorded. This was repeated every 10 minutes during the course of 4 hours.  Three treatment groups were studied: An untreated control was compared to arms treated with Cutter® (7% DEET) insect repellent and arms treated with Deter Insect Repellent™. The entire test was repeated twice.

Want to join the discussion?
Feel free to contribute!