The objective of this independent study was to scientifically analyze the effectiveness of Deter Insect Repellent™ and to compare the product’s efficacy against DEET-based insect repellents (Cutter® 7% DEET and Off® Deep Woods 25% DEET), as well as two commercially available botanical repellents (Repel® Lemon Eucalyptus and Bite Blocker® Xtreme Sportsman). All products were tested against an untreated control. The study was conducted using the Cage Test Method and analyzed the landing/biting activity of female Southern House Mosquitoes (Culex quinquefasciatus). The arms of human test subjects were exposed every 10 minutes during the 6 hour test period. The entire study was replicated twice.

The test results issued in April 2013 demonstrated the average mosquito landing rates during the 6 hour test period were 48.5 for untreated control and only 0.25 following treatment with Deter Insect Repellent™.    Results also showed that Deter Insect Repellent™ remained effective for 6 hours without a reduction in repellency. The test demonstrated that Deter significantly (ANOVA, p<0.05) out-performed Repel, Bite Blocker and Cutter 7% DEET while remaining as effective as Off containing 25% DEET.

“Due to the toxicity and environmental concerns regarding the use of DEET we set out to develop a safe and effective natural insect repellent,” explains Brad Zaro, President & CEO at Mariner Biomedical, the company that developed Deter Insect Repellent. “We conducted extensive scientific research to develop a naturally derived product that effectively repels mosquitoes and other biting insects for an extended period of time. We are very pleased that this study confirmed the efficacy of Deter, and demonstrated that it out performed several competing products while proving to be an effective alternative to DEET”.

Deter Insect Repellent™ is one of the only natural insect repellents which has scientifically demonstrated its safety and efficacy. Consumers have a large number of repellent products on the market from which they can choose. DEET-based products remain the most commonly used repellents. However, with growing concerns about the safety and environmental impact of DEET, as well as other chemical based repellents, consumers are increasingly seeking safe natural alternatives. Deter Insect Repellent™ is proven safe, effective and environmentally friendly, providing consumers with a product that truly works and that they can feel good about using on themselves and their families. 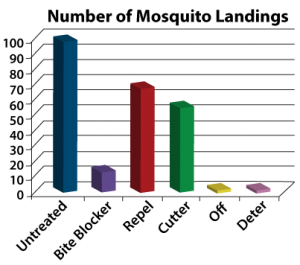 METHOD: Screen Cage Test was employed using the Southern House Mosquito Culex quinquefasciatus. Hungry female mosquitoes were present in a screened cage. The arm of a human volunteer was inserted into the cage for 2 minutes and the landing and feeding rates were recorded. This was repeated every 10 minutes during the course of 6 hours. Six treatment groups were studied: An untreated control was compared to arms treated with Repel® Lemon Eucalyptus, Bite Blocker® Xtreme Sportsman, Cutter® (7% DEET), Off® Deep Woods 25% DEET and Deter Insect Repellent™. The entire test was replicated twice.

RESULTS: Between 5 and 6 hours the mean landing rate for the untreated control = 33.67 mosquitoes every ten minutes. This compared to the mean landing rates following treatment with Cutter® (7% DEET) = 7.42, Bite Blocker® = 1.61, Repel® = 7.92, Off® = 0.17. The mean landing rate following treatment with Deter = 0.67. The results showed at 6 hours Deter provided significantly better repellency (ANOVA, p<0.01) compared to the untreated control and significantly better repellency (ANOVA, p<0.05) compared to Cutter® (7% DEET), Repel® and Bite Blocker®. The results also showed that Deter remained effective for 6 hours without reduction in repellency, and was statistically equivalent to Off® Deep Woods containing 25% DEET.

Want to join the discussion?
Feel free to contribute!